Just goes to show the power of community.

After two years Shanti Bee running activities at Lindisfarne Festival and loving every minute of it, when asked again, of course I said yes.

Lindisfarne festival brings about 4000 + campers together up the coast in Northumberland. This year the Healing Area grew significantly hosting therapies, workshops, DJ’s, bands, stalls and a vegan café!

Alongside running the healing area this year I also took on the role of Décor Manager, co-ordinating indoor and outdoor décor for the festival.
It was a big job, so I reached out to creatives in the community and formed a team of ten, with another twelve volunteers who got involved in the hands on work we set about getting creative.

The Vikings and Queens theme for 2019 inspired our ideas.

In Norse mythology Yggdrasil is known as ‘The tree of life’, with this in mind I set a brief of a mystical wood. We came together as a small team of 6 to start and decided upon a group of trees to represent our ‘Norse Woods’.
Also an inspired idea was the Viking and Queen portraits you find as you enter the festival.

All around the festival you might of seen stencils of selected Norse Symbolism on fencings by Chris Flemming – on the seating’s, inside some of the tents and all over 100’s of metres of Scrim which surrounded the festival.

We made over 100 of metes of Rag bunting as part of Shanti Bee Community activity days. That’s a lot of rags!

We also did the décor for the two main tents; the Main Tent and the Beer Tent.

In these tents you will not miss the decor, crated with the Viking Gods Odin and Freyja in mind.

75% of the decor was made using reused fabrics, woods and other materials – with everything being created from scratch, apart from all the disco balls!

A huge thanks you to artists Flo Atkinson and Fran Coles, Emma Pace, Chris Flemming (IDa4) and Tara Jayne Robson the décor team.

The decor project has been a huge and very successful community led project. We had such a fantastic time and it’s given me a whole new wave of energy for the work I do at Shanti Bee.

Community is one of the most important things to me and the community around Shanti Bee in the run-up to the festival was something else. I was blown away by the passion and capacity people have to give when part of a creative and highly collaborative community driven directive.

In June 2015 Shanti Bee established as a CIC and moved into an office space in Broadacre House, offering ‘pop up’ treatments two days a week. I’m so thankful for that space.

A year later to a shop front on Newbridge Street attached to Chilli Studios – we learnt so much here.

In March 2017 we formally opened our doors in Charles Street Community Centre and have loved every minute since. What started as a pop-up project offering health therapies and yoga has become so much more.

As our vision and capacity grows the principle that mental health can be improved and developed alongside our physical health using holistic health practices remains.

The work I did for Lindisfarne as Shanti Bee has reinforced to me the importance not just of community projects, shared community well being spaces and accessible alternative health options but has reminded me how much I love seeing people come together and the magic that happens when we do.

A mutual space in which well-being is the shared interest is an invaluable asset to any community – community and well-being go hand in hand. 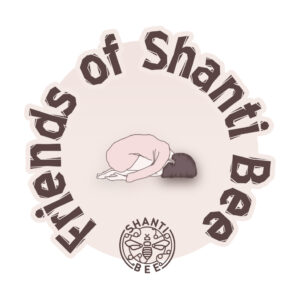